On October 23rd, the Club visited Greenwich Audubon and the Quaker Ridge Hawk Watch, one of Connecticut’s premier fall-birding destinations. The focus of the trip was hawk watching, but the property grounds beckoned us in for some morning birding as well.

We arrived at dawn to catch morning flight, when passerine migrants drop down to earth in the first few moments of daylight. An impressive number of birds were moving, although of limited variety. Large numbers of Robins streamed overhead, with decent numbers of Eastern Bluebird and Cedar Waxwing mixed in. A couple Grackle and Red-winged Blackbird were moving as well. The highlight came in the form of a single Eastern Meadowlark that zipped by over the orchard. We were also surprised to see a kettle of 18 Turkey Vultures rise up from the trees– raptors generally appear later on in the day.

After the flight had died down, we traversed the Audubon property for a few hours hoping to stir up any lingering warblers and sparrows. We had nice looks at Black-throated Blue and Nashville Warblers alongside a slew of other species including Winter Wren and Chipping Sparrow.

As things warmed up we stationed ourselves at the hawk watch, where a couple other observers had already gathered. The wind was blowing from the Northwest, perfect for hawk movement– although as one of the hawk watchers explained, the winds were strong enough that many migrant raptors would be blown to the coast instead of traveling along the inland ridge lines. It takes a myriad of ideal factors to coordinate for a superb hawk flight, and things weren’t quite right; most of the hawks we saw were moving low along the treelike instead of wheeling about overhead in classic migratory fashion.

This being said, decent numbers did materialize. Over 50 Turkey Vultures passed by, followed by 25 Sharp-shinned Hawks and 22 Red-tails. At this time of year, counting Red-tails is a tricky task, for a mix of resident and migratory birds are expected. It’s often difficult to tell whether or not a Red-tail is a migrant or not, and this point aroused discussion amongst the hawk-watchers throughout the day. We continued to build upon the diversity of our raptor list as the day progressed, with American Kestrel, Cooper’s Hawk, Osprey, Bald Eagle, Black Vulture, Northern Harrier, Peregrine Falcon and Red-shouldered Hawk joining the ranks. A couple of these birds dived on a model Owl that had been erected adjacent the watch, allowing for great looks. Our vigil at the watch also produced some nice passerines: two Rusty Blackbirds perched up on a nearby tree, a small flock of Purple Finch passed by, and a White-crowned Sparrow teed up in the grass.

We were enjoying our stationary count, but pining for a rarity: hopes for Golden Eagle and Northern Goshawk induced salivation. Little did we know, our day was about to get really crazy.

At around 12:45, Jory got a call from club member Preston Lust. He hadn’t been able to make the trip due to family commitments, but had been doing some very local birding in Westport, CT (his home town). While doing so, he stumbled across an unfamiliar bird at Sherwood Island SP, and Jory became visibly excited as Preston relayed his observation over the phone.

The verdict? Preston had found what was likely a Sprague’s Pipit, a bird never before recorded in Connecticut. However, he wanted confirmation. Jory made a few calls, and we were on our way.

20 minutes later we piled out of the car onto the Sherwood Island airfield where Preston had last seen the bird. Local birders Tina Green and AJ Hand were already on the scene, although they hadn’t covered much ground yet and the bird remained a mystery.

We fanned out over the expanse of grass and pushed forward. A flock of Green-winged Teal and a Wood Duck erupted from the marsh. A Wilson’s Snipe flushed and shot away from us, passing a flock of Eastern Meadowlark that has settled down into the grass. Then, out of nowhere, a passerine appeared from the grass, shooting skyward. It was a Pipit. It’s tail feathers flashed extensive white.

Chaos ensued. We frantically hurried to the spot where it had dropped back in to the grass, silently mulling over our disbelief. There it was. A Sprague’s Pipit sat  in the grass, basking in the sunlight in glorious tones of buff and brown. An eruption of camera shutters ensued, filling frame after frame with undeniable records shots. Phone calls were made. The list serve was notified. Frantic texts began to circulate. We personally congratulated Preston and his brother Terry, the proud finders of this truly epic bird. Within 15 minutes, birders began to arrive. The Pipit stayed cooperative, although comically elusive at times– it scurried like a mouse from tussock to tussock, practically melting into the grass and then reappearing in the complete opposite direction. 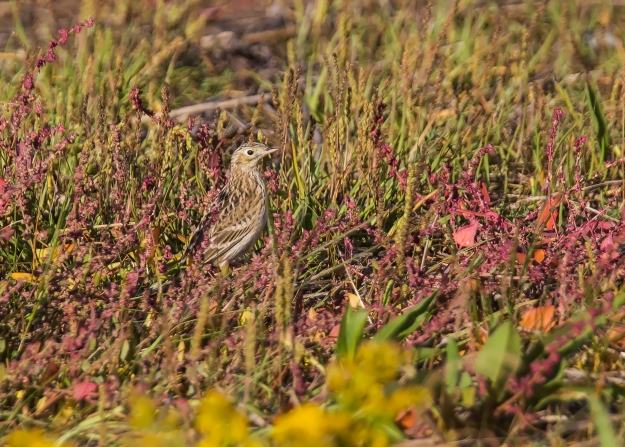 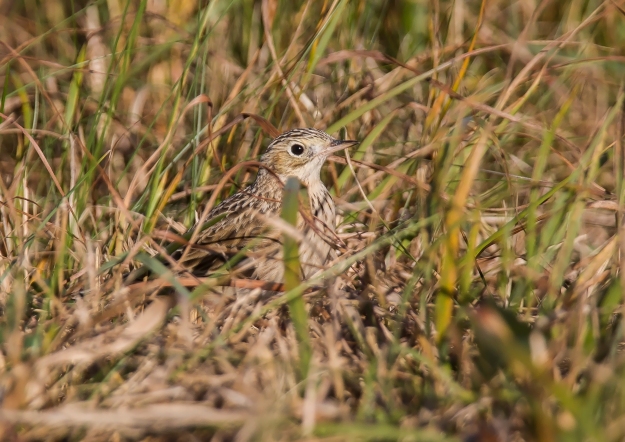 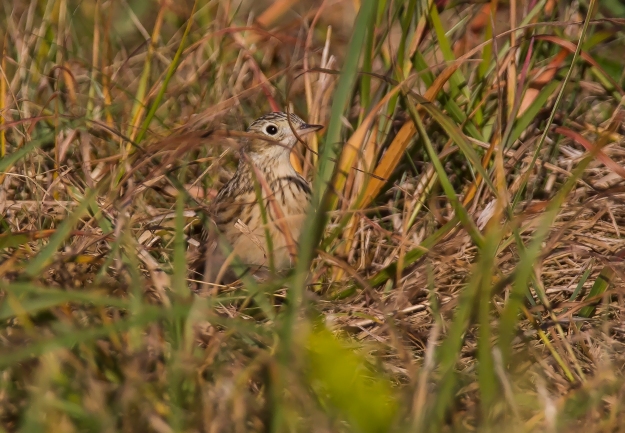 The club is immensely proud to see one of our own go down in history as the finder of a first state record. As far as we can tell, this is the only rare bird of this magnitude ever discovered by a young birder here in CT.

Preston and Terry Lust, our hats go off to you.

At 8 AM, a group of seven birders (including myself) gathered in the school parking lot in Barkhamsted, CT and set off on a bird hunt.  We split off into three groups and scoured the area, looking for the previously reported HERMIT WARBLER.  To everyone’s complete and utter surprise, we received a text message in the group chat with one word, “school” no more than an hour later.  Hysteria broke out amongst the groups as we frantically left our posts and raced to the school.  Right before the school parking lot, we saw Phil Rusch frantically waving his arms as he stood along the side of the road that paralleled the Farmington River.  We swerved into the parking lot and dashed over to where he was looking.  He told us that himself and Fran were walking along the side of the road when a small bird flew over and landed eye level in a sycamore tree.  The first thing Fran saw when he picked up on the bird was that classic golden face.  And so a series of frantic phone calls and searching ensued.  Within the hour, people started appearing on the scene.  In the four hours I was there, more than 40 people were looking for this special treat.  Only a second state record, this bird does not make it’s way often from it’s normal range of the Pacific NW.  This bird was at first very active and hard to get long views of.  However, in time the bird didn’t seem to care about the large group of birders as it made it’s way on the river bank not 8 ft away.  At times it landed only 3 ft above my head!  This western warbler appears to be pretty healthy and hopefully will stick around for many more to enjoy. 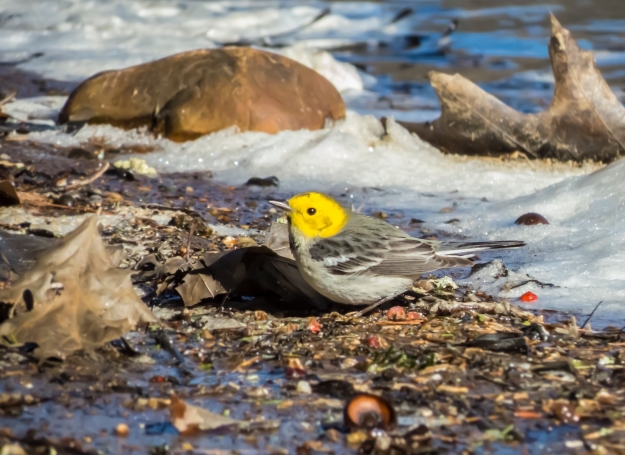 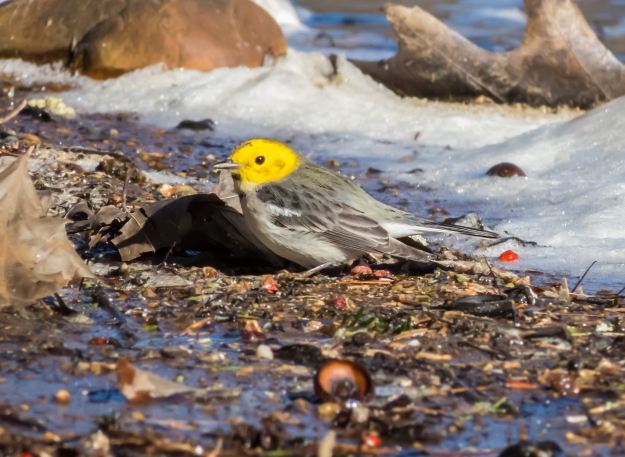 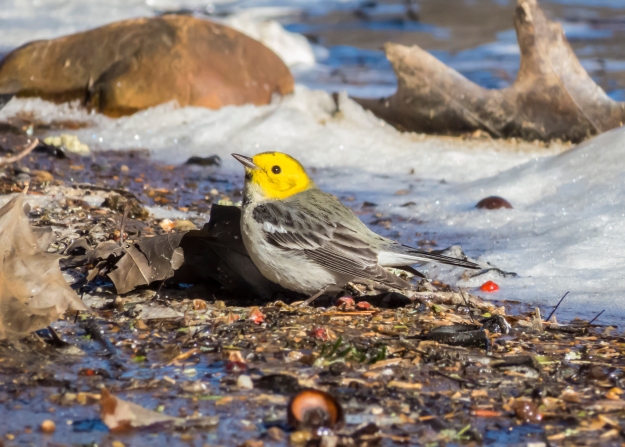 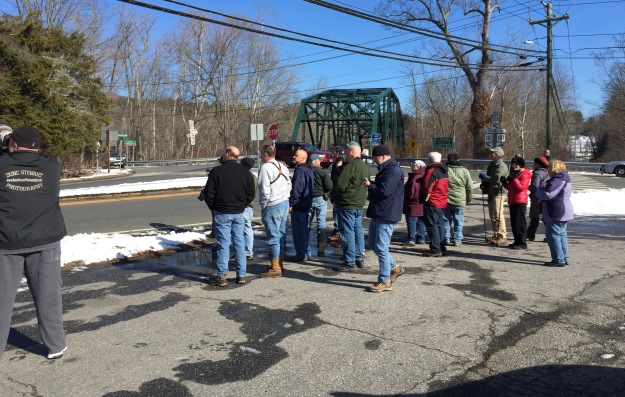 Part of the group of birders looking for the Hermit Warbler

After my concert today, I raced home, grabbed my camera and bins, and was out the door to chase an adult male WESTERN TANAGER in Branford.  I didn’t even change out of my tuxedo!!  As we pulled onto the street in the dim light, a somewhat large, long bird shot across the street and disappeared behind some trees.  I jumped out of the moving car and said, “was that it?!”  The group of birders replied happily “yes!”

This morning, AJ Hand spotted what he thought was a late Great-crested Flycatcher.  Tina Green rushed to the scene, only to ID the bird as an ASH-THROATED FLYCATCHER, a very rare western vagrant, only seen in CT 5 other times.  Brendan, Aidan, Alex, and myself were one of the dozens who got to see this fabulous bird, right in Fairfield County!

Today represented the greatest East coast invasion of Franklin’s Gulls EVER!!!  In CT alone, there are at least 35 birds!!!

After school, I managed to see/find 2 first-winter birds at Southport Beach with Aidan.  Here is my best digiscoped photo. 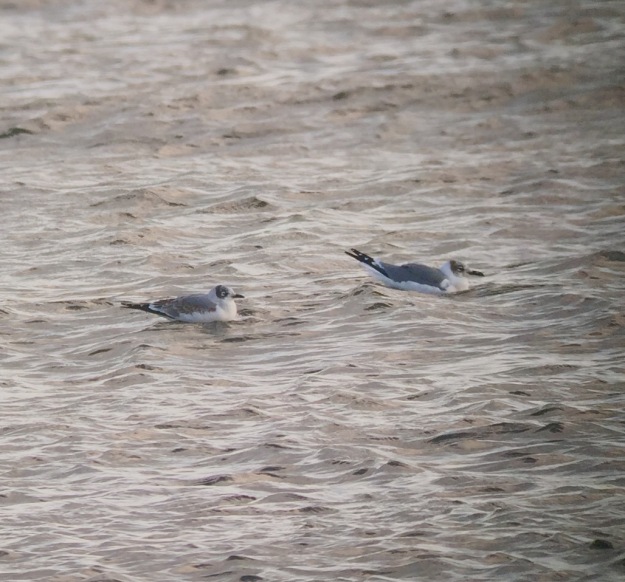