In the winter in Connecticut, almost all the birding is associated with the coastline. Sea ducks are the primary goal of this coastal birding, but a lot of passerines are connected to the coast as well. Our February trip primarily focused on a few of these species, from Harlequin Ducks to Iceland Gulls. We concluded that Rhode Island would be the best location for these species, but a quick stop in Connecticut couldn’t hurt. We started the morning in Stonington, where birding was fairly uneventful. We tried for a Black-headed Gull (that I’d already seen) at the Stonington Docks but it wasn’t cooperating. We then crossed the border in to Rhode Island and headed to Trustom Pond NWR. The feeders were hopping as soon as we exited the car, with bunches of sparrows, blackbirds and finches getting a snack. In hopes of a Gray Catbird or some ducks we headed down the trail to the pond.

The trails were pretty quiet, as much of the vegetation was not in bloom. But, there was a lot of shrubby area and we eventually did find a Gray Catbird near the end of the trail! This was a yearbird for a few club members including myself. We had pretty good looks but it quickly evaded our cameras shortly after. We then approached the pond, where we immediately noticed a Great Cormorant! Often found on rocky coastline areas, this bird was calmly hanging out near the entrance to the pond, which gave a few of us a laugh. 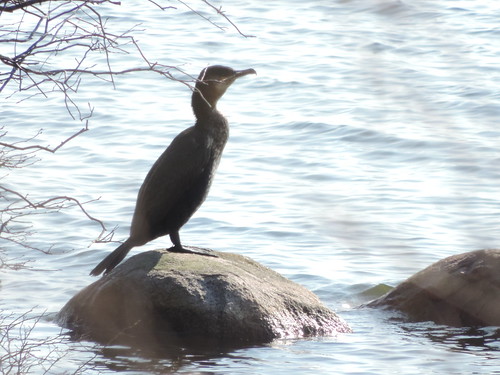 After that we noticed an enormous raft of scaup in the center of the pond, which we eventually concluded was mostly Lesser Scaup. There were about a dozen Redheads in there as well as a few Greater Scaup, which was nice to see. After further observation we picked out a few male Canvasbacks taking a short nap. There was also a Ruddy Duck, a Common Merganser and a few Bufflehead in the pond.

Trustom Pond was certainly worth the stop, and we even had a pair of Wood Ducks fly over as we exited the trail. Our next stop would be Beavertail State Park, and we would not be disappointed. We checked some rocky coastline for Harlequin Ducks, and they were there right by the rocks, allowing for some close looks. A little climbing and manuevering down the rocks got us great views. Since I didn’t have a scope, I was on “gull watch” while others were scanning the Long Island Sound. Gull watch paid off, as a lovely adult Iceland Gull flew right by us. We would have better looks at this bird later.

Once we were finished drooling over the male Harlequins, we headed to the other side of the park. Aidan had already found this secret spot, and as soon as the rest of the club saw it, we were truly amazed. Hundreds and hundreds of scoters were sitting closely in the water! Most of these birds were Black Scoters, but some Surf Scoters and Common Eiders were also nestled into this lovely flock. We admired these birds for a long time, even hearing the scoters call at one point. Some more rock-climbing allowed for closer looks, and we reconnected with that Iceland Gull as it flew right by us again. The sheer amount of scoters in this one area made Beavertail an unforgettable experience. 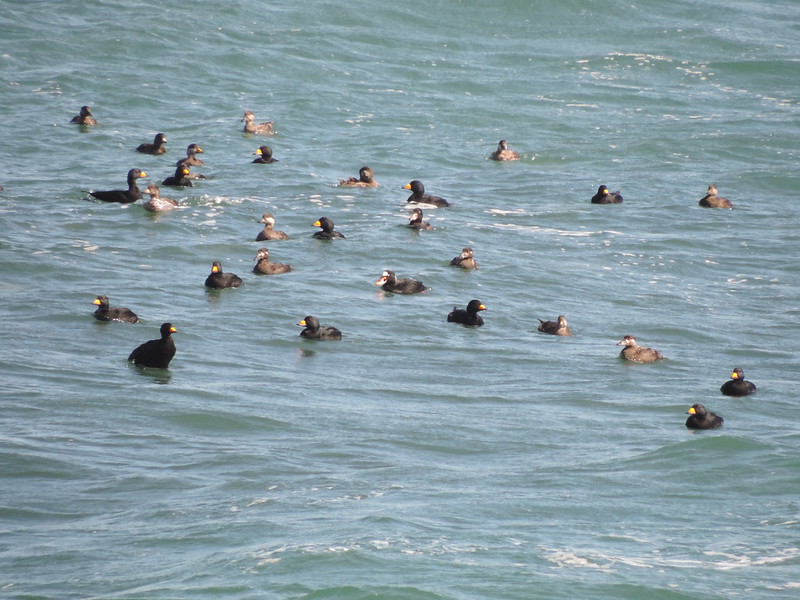 Some quick sewatching from the point was also productive, as we found a pair of Razorbills in the sound! An excellent bird for the Sound, Razorbill was a life bird for me and Aidan. These birds were up and down quickly, constantly diving for food, but we had them periodically in the scopes for a long time. Our next stop was a quick rarity check, as we moved eastward to find a Sandhill Crane. I’ve only seen this bird in upstate New York before, so good looks at it in Rhode Island would be great. With the help of a local birder there, we found the spot for it fairly easily. The first thing we noticed there was an adult Snow Goose, a pleasant surprise and another good bird. Shortly after we had the crane, and got some awesome looks through our binoculars. We even heard the bird call a little bit, and we eventually got to witness its majestic flight as it took off making its rattling noise. Seeing a Sandhill Crane at such close range is something we don’t get to do much in Connecticut, so we were all glad to see this beautiful bird. 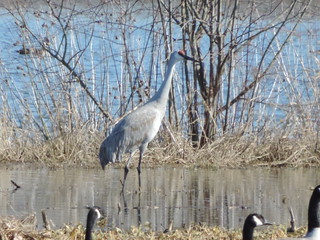 We moved on to Sachuest Point NWR, a great spot for Harlequins as well as more sea ducks. It wasn’t as productive, but we were happy to get Aidan his life Purple Sandpiper, a lone bird hanging out on a rock. These birds are closely tied to rocky coastlines in the Northeast during the winter, and Sachuest Point is a great place to find them. Searching for a Snowy Owl was unsuccessful, partially due to vague directions from the visitor center’s notes. But, birding the brushy trails of Sachuest Point was a good way to cap off an awesome February trip, highlighted by astounding numbers, great rarities, and a couple life birds for some of the club members. Until next time, happy birding!