On August 30th, the Connecticut Young Birders Club went out on a pursuit of shorebirds during the height of shorebird migration. We were accompanied by Nick Bonomo, an excellent birder from the area. We had a big group, with Nick, my dad and seven young birders! Our far-fetched goal was 20 species, but we had a long day ahead of us. Our outing began at about 6:15 at Griswold Point, in the eastern section of Connecticut’s coast. This is a private area that is very dependent on tides, and we had to get a quick visit in before the tides got too high. When we arrived, we quickly stumbled upon Semipalmated Plovers, American Oystercatchers, Spotted Sandpipers and Greater Yellowlegs.

Evenually we made our way up the flats and noticed a Peregrine Falcon hunting some terns far out on the ocean. We noticed that the bird was in hot pursuit of one tern; they can spend quite a long time chasing just one bird until it is caught. We also noticed a small group of Willets, and Nick even pointed out a bird that was of the “Western” subspecies! Our first good find of the day, the Western Willets are much paler and even a little larger. Although it is only a subspecies right now, they may be split fairly soon. Other notable wildlife on the point included a couple Least Sandpipers (we noticed that they were juveniles due to their sharper plumage), a pair of Savannah Sparrows in the grass, a large flock of starlings that included a leucistic bird, and large numbers of Black Saddlebags and Seaside Dragonlets. 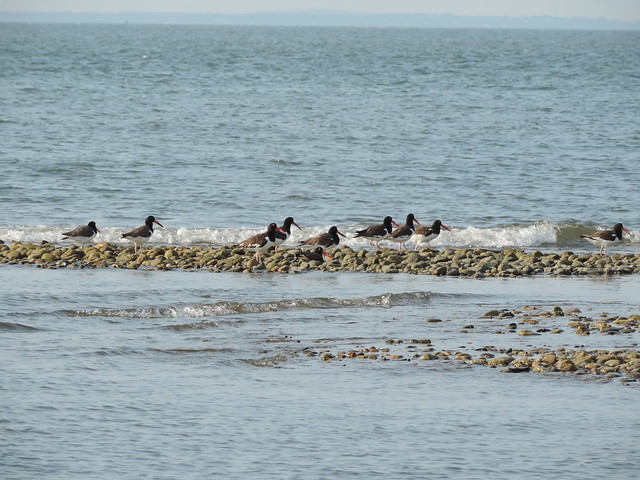 A large group of American Oystercatchers that included some juvenile birds.

Our next stop was the East River Marsh, a location in east Guilford where Whimbrel had been reported. Nothing was present near the boat launch, although some Seaside Sparrows (a life bird for me) made an appearance. We headed to the beach on the other side, and quickly, the Whimbrel made its appearance! Right in front of our group, the bird made a quick circle around the beach. Our excitement continued when we saw a Merlin on the ocean and a Prairie Warbler in a tree, a pair of good birds on the day.//embedr.flickr.com/assets/client-code.js 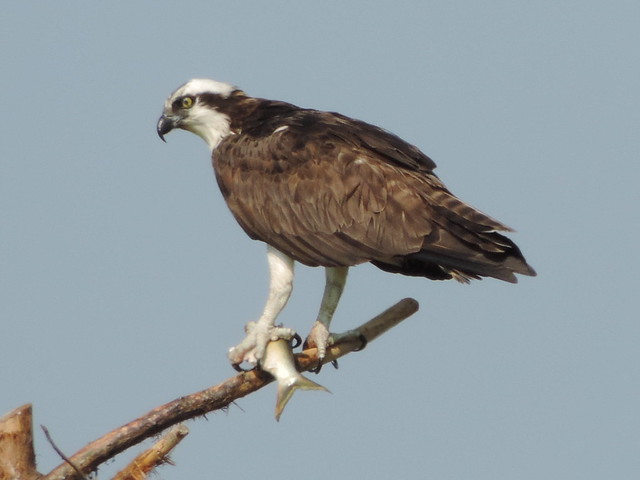 An Osprey shows off its talons (and its lunch) as it perches near a nest. Ospreys are very numerous in the East River Marsh as the coastal habitat provides a good nesting location.

Next, we headed to Chaffinch Island Park, which had kept a rare Marbled Godwit around all week. This was a quick chase, as the bird was relatively easy to see right out by some rocks! Accompanied by Laughing Gulls, American Oystercatchers and some more Willets, the godwit was a great bird for the entire group. 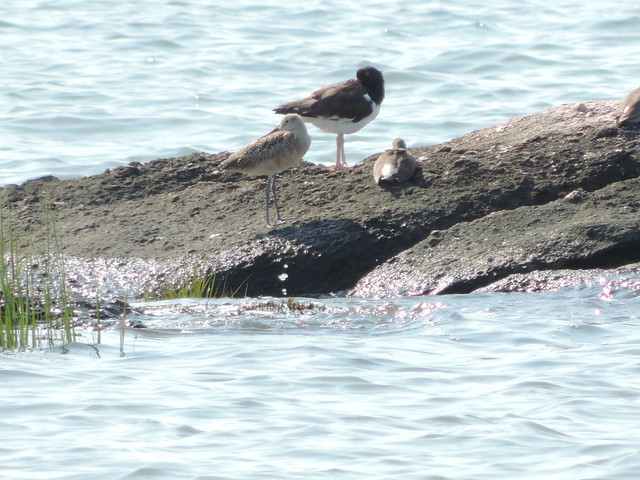 The Marbled Godwit is a rare but annual bird on CT’s coast, showing up in fall migration. This bird was luckily easy to find, and helped us gain another shorebird species to our day list.

Guilford is a great town for birding, and we stayed there by heading to the Shell Beach area for some inland birding. Quickly, we happened upon some Short-billed Dowitchers, Lesser Yellowlegs and a Killdeer, all new for the day. But most exciting was when Nick pointed out a distant Western Sandpiper among the other Semipalmated Sandpipers. Western Sandpipers are larger-billed, often with more rufous on the scapular feathers. Eventually we found three Westerns at this location with Nick’s help, and became fairly good at pointing them out ourselves. Another good bird, a Pectoral Sandpiper, also made a quick appearance in a scope, adding a hard-earned tick to our day list.

We then left Guilford and headed to Stratford for some quick birding. We first arrived at the pool by Access Road, which can be productive for shorebirds. Although there was talk of a Solitary Sandpiper there, nothing showed up, so we headed to the Sikorsky Airport. Having large areas of open fields nearby, the airport was a possible location for things like American Golden-Plover and Buff-breasted Sandpiper. But nothing but Killdeer was seen on the runways, although some Cliff and Bank Swallows did make an appearance flying over the fields. We next headed to Stratford Point, and found yet another Western Sandpiper. This one was located and found by Preston. Large numbers of Semipalmated Sandpipers and Plovers showed up, but there was a surprising lack of terns around. Leps were quite exciting though, as Brendan identified Common Buckeye, Black Swallowtail, Swarthy Skiper, and many others. 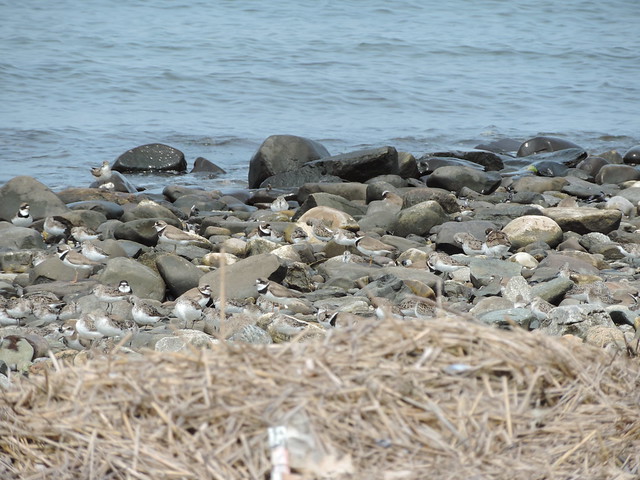 Semipalmated Plovers and Semipalmated Sandpipers congregate on the rocky coastline of Stratford Point.

A quick stop at the Stratford Marina yielded nothing new, but we got great looks at both species of yellowlegs, along with Short-billed Dowitchers. We studied the dowitchers quite arduously, as Long-billed Dowitcher is a rare possibility at this location. But close looks at these species are always nice, and we headed over to Milford Point. 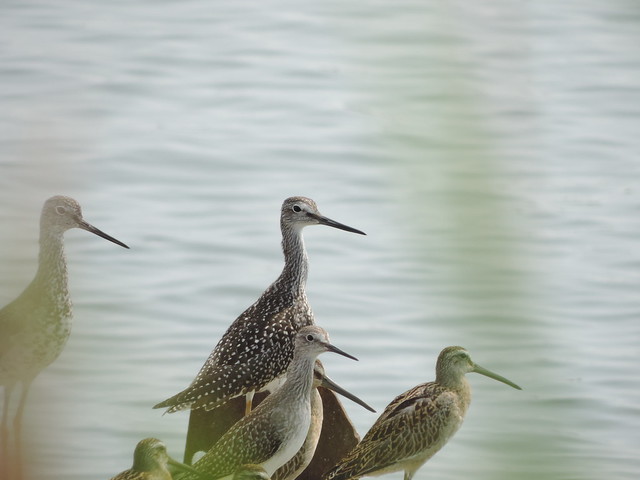 This shot includes three species of shorebirds, including both yellowlegs species. The Greater Yellowlegs is much larger in comparison, and has a longer bill. The Lesser Yellowlegs is right in front of it, and is much smaller. You can also notice a Short-billed Dowitcher juvenile on the right.

Milford Point is one of the state’s most productive shorebird spots. Even at high tide, the sandbars are a great location for things like Red Knot and White-rumped Sandpiper. We first noticed a knot in the sandbar, hanging out with a flock of Black-bellied Plovers. Being one of the largest sandpipers in genus Calidris, it was roughly the same size as the plovers but was much plainer. In summer plumage, the knots take on a beautiful red-orange color, but this bird had molted completely into its drab winter plumage.

Our last stop of the day was Sandy Point, in West Haven. With 18 shorebird species on the day, we were lucky we had saved the best for the last. We lucked out on the tide, as the flats were in such perfect condition that many shorebirds gave great looks. Least and Semipalmated Sandpipers offered great views, and we took advantage of the comparison look. However, nothing too exciting was showing itself. Besides another Western Willet, the birds were relatively normal. 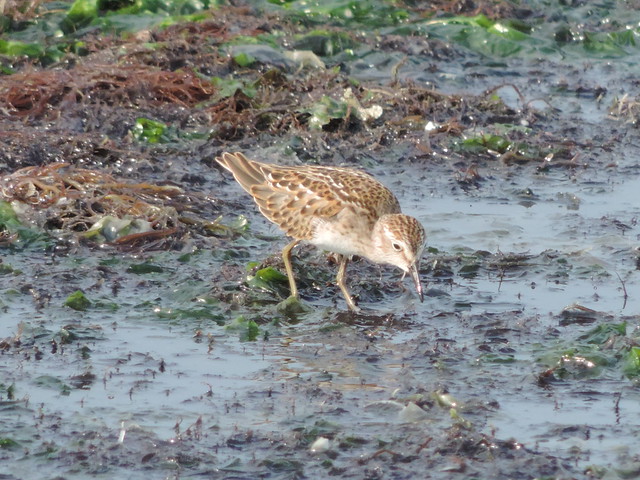 This Least Sandpiper was kind enough to put itself in great light for photography. The smallest sandpiper in North America, Least Sandpipers are thoroughly rufous on the back and have yellow legs, unlike the closely related Semipalmated Sandpiper.

Suddenly, Jory’s voice got my attention. “Buff-breasted Sandpiper, in the scope!”, he yelled frantically as we excitedly lined up to see the bird. The Buff-breasted Sandpiper is a very rare shorebird on Connecticut’s coast, and was a life bird for me. It eventually moved closer to the group, living up to its reputation of being one of the tamest shorebirds. A first-year bird, this species nests in the tundra of north Canada, and we may be the first people it had ever seen! 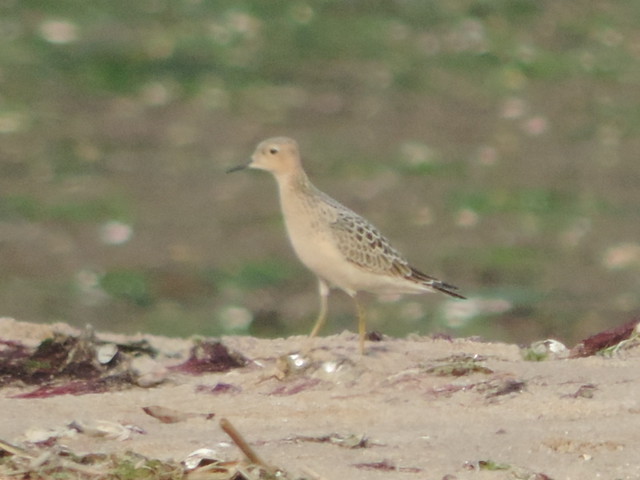 Nothing could top the last shorebird species of the day, the Buff-breasted Sandpiper! Not only was it a rare find, but this is a lovely species to see, with its tame nature and its lovely plumage.

Our 19th shorebird species of the day was a great one, but we were still hoping for 20. With one species to go, we were still looking for White-rumped Sandpiper, a rare possibility at this location. Unfortunatly, after some scanning of the flats, we came up empty, although we did find a Pied-billed Grebe in the water right as we left. Despite not reaching our goal, we all had an awesome time full of life birds and beautiful looks at a Buff-breasted Sandpiper. This trip certainly was memorable, capped off by a lovely species of shorebird!